Even from far away still on the Tanzanian side I was able to see the beginning of Lake Malawi. As people told me before, Malawi is the warm/happy heart of Africa and there are some beautiful National parks and lake side camps to visit. I was pretty excited. The border crossing was simple, but expensive, I had to pay 75$ for the visa which is a lot for such a small country. Fortunately, I did not get my bags checked like some backpackers before me. Sometimes border security wants to check my bags and this takes forever, very annoying! Usually, before I cross borders I check the exchange rate for my leftover money. What I know as a fact is that you never get the online exchange rate. So, I just approached one of the guys, told him how much I have and what I wanted. Without hesitation he agreed. That is never a good sign haha! As I did not have much left it was fine, a loss of few cents is ok, even though I really dislike their pushy behavior and I never want to let them walk away with a profit 😀

Riding along the lake was a fantastic experience. The road is new and in super condition. There are barely any cars and I had a slight tailwind! Wuhu! I heard people struggled with a lot of headwinds, which is probably the worst thing you can have on a bicycle. 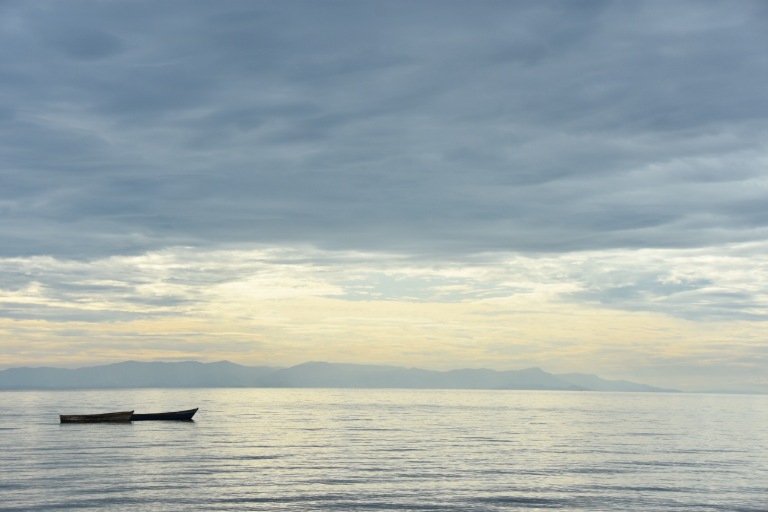 I enjoyed some swims in the lake and also went on a fishing boat with two locals. It was interesting to learn the techniques they use as well as to see the very colorful fish we caught. From the Lake I went up to a first plateau where Livingstonia lays. I stayed at mushroom farm and had one of the best camping spots so far. The hostel was well run, with good food, guided activities and hikes. I continued further on dirt roads towards Mzuzu, as the distance was too much to do in one day I had to find a spot somewhere. As people in Malawi were super friendly, and the population density is pretty high, there are not many options left than pitching the tent in front of a family’s house. Everyone is always very welcoming, offering me water to wash, food and even a space to sleep inside, which I kindly decline since I sleep way better in my tent:-) I loved cycling off the beaten track in Malawi, people were so much nicer than along the main road. As once a big storm came up I sought shelter underneath a roof. I sat 5 minutes there surrounded by kids as one of them walk out of the house with a plate of food, some shima, vegetables and bananas, exactly what I needed! Just this kindness towards strangers made me feel exceptionally comfortable. In Mzuzu I had the chance to get into the first real shopping market since Kenya! So nice to find stuff you haven’t had for a long time! The only downside to those shopping centers is that I always buy way too much stuff that I don’t actually need, but it is just nice to have it. 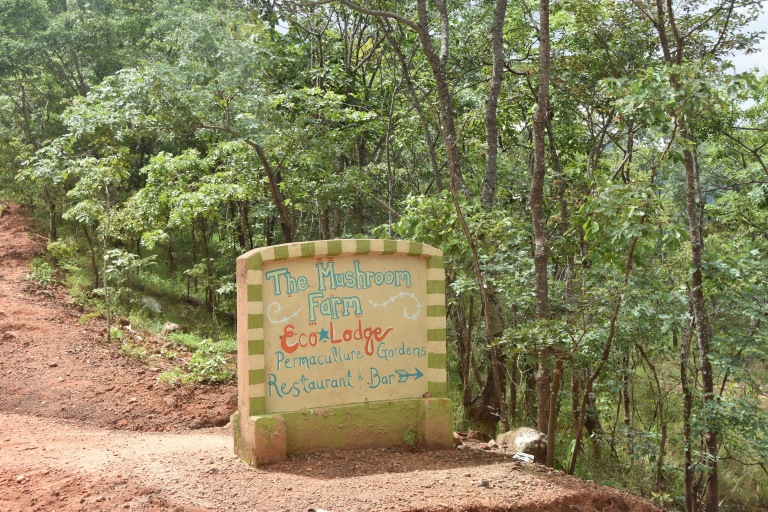 I had many thoughts about my route in Malawi: Should I continue down the lake or go up again and visit two National parks? As I went down to Nkhata bay I realized that I have spent enough time in backpacker’s/tourism places and even though it won’t be easy, it would def. be more memorable than following the main road down. Most cyclist are cycling all along the lake down to Lilongwe, the capital of Malawi.

I relaxed 6 days in Nkhata bay, did a lot of reading, swimming and it just felt good not doing anything at all. The lake was wonderful, but as it is rain season, a lot of dirt gets washed into it. I had 3 small open wounds which all got infected. First time for me this happened and I thought it is better to see a doctor:) He cleaned my wounds, gave me some antibiotic pills , a cream and I paid a total of 6$, totally worth it Since I decided to go up to Nyika and Vwaza Marsh National park, I had to go almost the same way back for 200km. I first thought it would be boring… but since I mostly face forward it felt like I haven’t seen this part before.

As I heard from overlanders before, the road up to the plateau is in a very bad condition and some couldn’t even drive up because of flooding rivers and huge put wholes. Anyway, I thought I have time and I heard so many good things about this NP that I thought I cannot miss anything if I just try hard enough. The way to the gate was ok, some passages where I had to push, some where the road was extremely bad that I just jumped off the bike and walked the stretch. I slept at the entrance gate of the national park the first night, so I had all day the day after to get from the gate to the camp. Initially, I thought it is only 30km towards the park, but as I talked to a ranger he told me it was 60km. Oh well, I thought, I will not return now. The next morning started with rain, and it didn’t stop until high up above 2000 meter of altitude. I haven’t experienced that much fog yet on my trip but it was for sure a bit scary to see all the Elephant dung laying around but not being able to see more than 5 meters. It was raining buckets for at least 4 hours. Sometimes I really asked myself, Lukas, what are you doing here. My bicycle was super heavy since I had food for 6 days with me and water for 2 days. Pushing all that weight up from 1100 Meter to 2350 Meters was quite a challenge. It took me 8 hours to get the 60km done. However, I really don’t mind about those challenges anymore. I realized those are the days I will mostly remember; all the tarmac cycling days are not very memorable most of the times.

As I stayed at the Chelinda Campsite I was provided with firewood and hot water every evening. I felt so much at peace up there. I was able to read a lot, do some maintenance on my bike, cycle around and just watch the wildlife for hours. As it is quite a nobel campsite, you are kind of lost if you don’t bring all your own stuff. Food and lodge rooms are very expensive, camping is only 10$ and if you cook for yourself it can be quite cheap all in all. I am glad I have some big bags with me which I can fill up with food. If I would not do bike packing I would have no chance to go to remote places like that and stay self-sufficient. There were absolutely no tourists up there which is pretty common right now everywhere I go since it is rain season. I loved it and it was definitely worth all the effort! 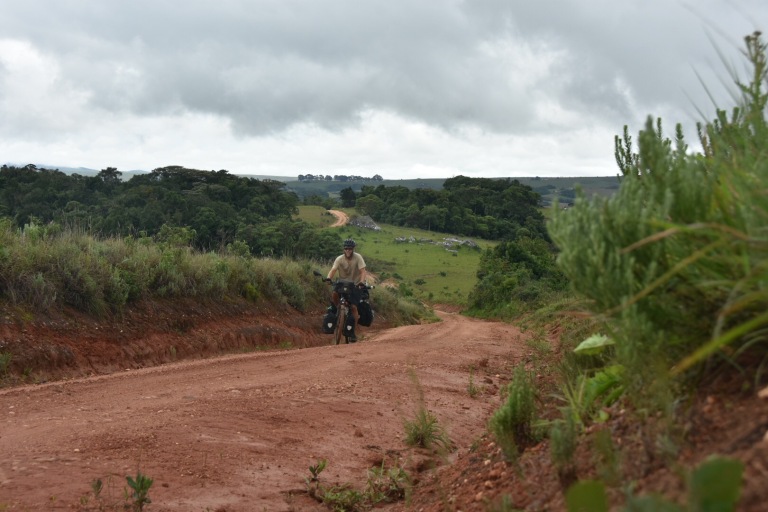 The beautiful thing about Vwaza is that during dry season all the animals from the whole park gather around the lake. During rain season however, you need to be very lucky to even see an elephant. I did not have any expectations going there, I wanted to cross over to Zambia from there anyway so why not sleep a night at Vwaza. I was very lucky and saw an elephant herd close by, what a great day it was. During the night was a bit at unease, I usually have no problems with wild animals around my tent at night, but that night I was a bit afraid from the hippos around. You never know what they might do. Even though the area and its surroundings are breathtaking, the campsite was very run down and filthy. I am always glad to have my tent with me, it is clean inside and no bugs will bite me at night.

From Vwaza I rode all the way to the border on dirt roads, roads I sometimes didn’t even find on Maps.me. People were welcoming, and I stopped a couple of times for a chat. Since I had a lot of time on that day I decided to head over to Zambia directly. It turned out to be more of a challenge than I thought. For the first time on this trip I got completely lost in a forest. I tried to get to the great border road which goes along the Zambian Malawian border, however it took me over an hour fighting through thick bushes to find it. I always continued and thought yeah this road will somehow get me there, it turned out that most of them brought me even further away. It was totally an adventure, I didn’t feel lost, since I thought I can always pitch my tent and go back the same way on the next time, but I was really glad as soon as I got back on track again. 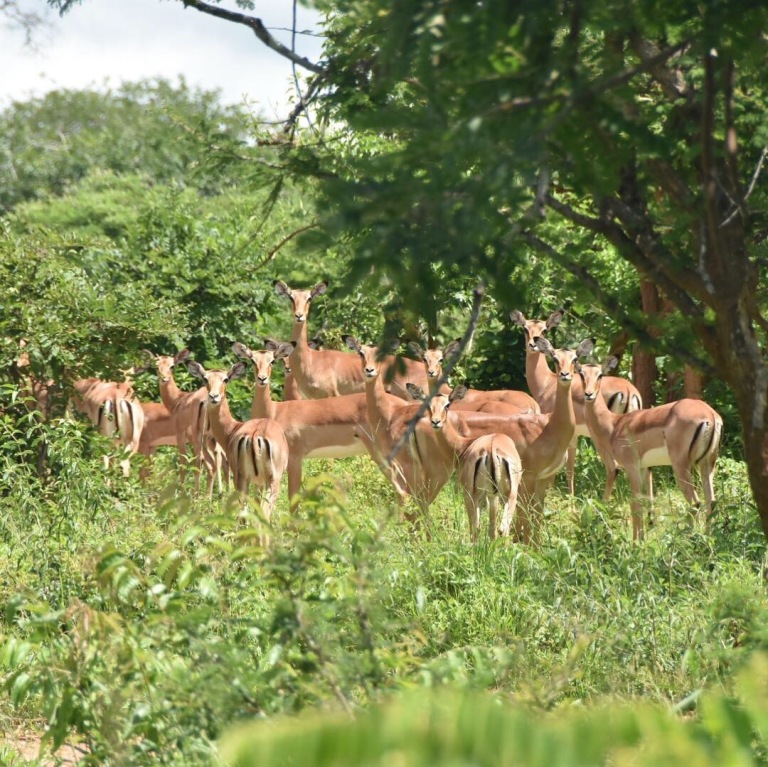 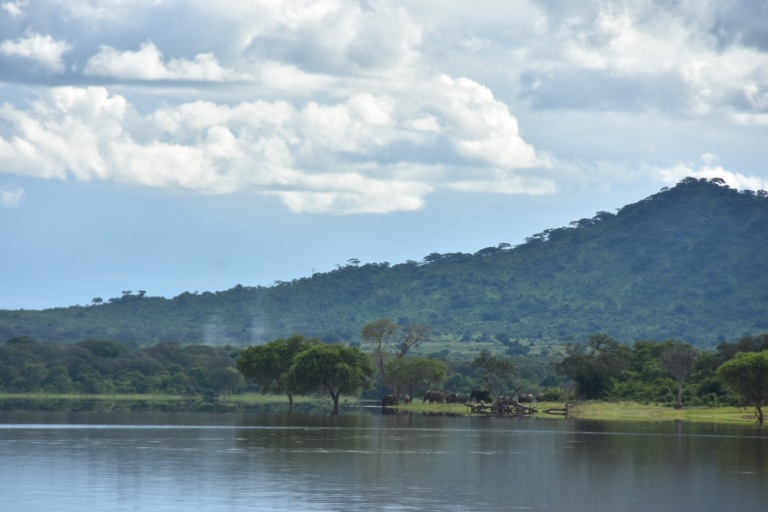 As anywhere where agricultural income is a big part of the economy, cash crops play a major role. For the first time on this trip I have seen Tobacco being planted. Depending on the region, I either see tea, corn, chilies, tomatoes, bananas and beans quite often, but tobacco was the first for me. As I talked to local families and farmers, they explained that they harvest the tobacco leaves once per year, it goes first to Mzuzu and from there to the capital Lilongwe, from where it is shipped to America. A farmer told me that prices fluctuate, as everywhere it is all about demand and supply, however, he also said that it is currently pretty stable.

I had the pleasure to be riding in Malawi on three Sundays, and every time the same thing repeated itself. It seems like the whole country is drunk on that day. Every man at the side of the road has shiny eyes, shouts something no one understands and usually cannot walk straight anymore. If you enter small stores, they usually have half of the shelf filled with stuff like biscuits, bred, washing powder, and the whole other part is filled with small alcohol bottles. One bottle contains around 200ml and costs 40 cents and has an alcohol percentage of 45%. No wonder why so many people have an alcohol problem.

It was raining the whole day on my way down from Nyika National Park, the roads where a mess and some people told me not to take the shortcut. As I did the shortcut before the other way and I didn’t want to do 10 extra kilometers, I took the shortcut again. Unfortunately, as it was already raining for hours straight, the red clay ground became really slippery and dangerous with the heavy bike. I sometimes got off and walked down, sometimes I just risked it to ride down. Unfortunately, it got me really bad at one spot and my bike just didn’t stop slipping down and I really fell hard to the ground. Luckily, only a couple of scratches, just the thought of what is if something had happened in such a remote area was a bit scary. This was the first time I fell off my bike, and hopefully also the last time.

People along the road