It is a solid 2 weeks and another 1000 kilometres since my last update. During that time, I mainly cycled in Croatia, passing through cities like Rijeka, Zadar, Split, Makarska and Dubvronik. I was able to experience all of the Croatian elimination games while being in Croatia. The atmosphere was stunning! This was the first time I was in a country while its football team was playing the world cup final.

The scenery along the coast is breath-taking. However, there is simply too much traffic, as the summer vacation have started everywhere. You could also call it the road to heaven…  as the number of gravestones I saw along the coastal road is just crazy. Most of them had a motorcycle engraved and the victims aged from 20 to 35. To all bikers out there: Please be careful on your bikes this summer. 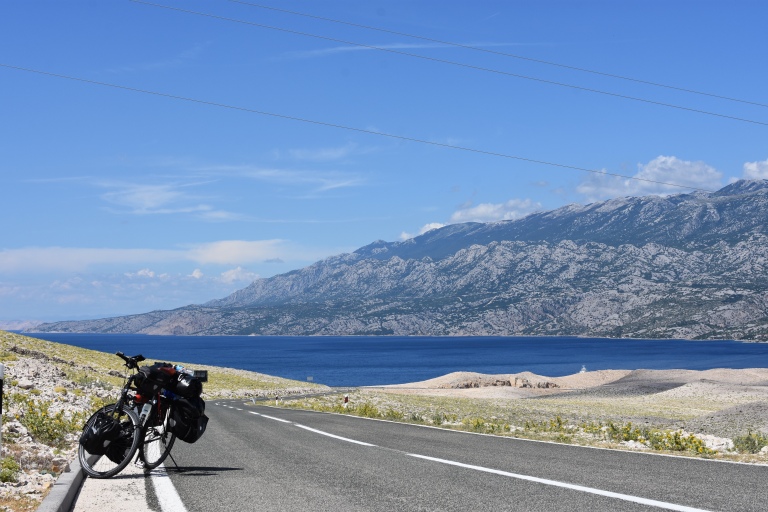 Along the road you also find a terrible number of dead animals which got hit by a car. It’s especially rough for me in the mornings. The smell of decomposition makes you want to throw up.

I am really excited to move on towards the country side, staying off the highways. I have already been lucky a couple of times not to get hit by a reckless truck, bus or car driver. I will leave the coast tomorrow, heading towards Tirana, the capital of Albania and from there further up to the lake Ohrid. 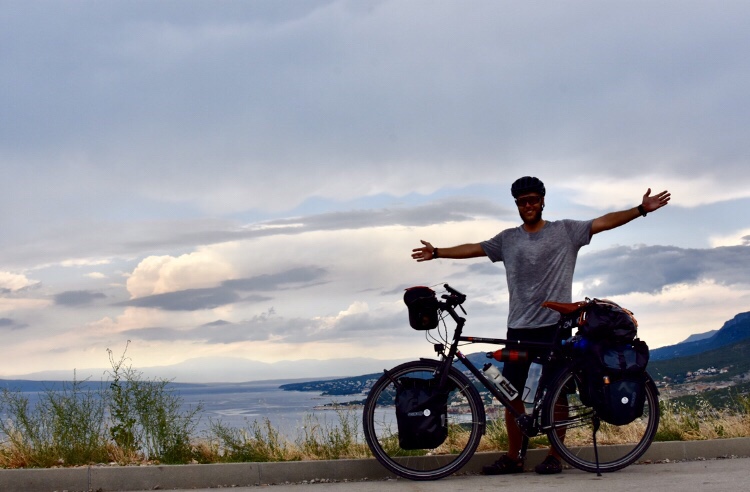 Literally, there were many up and downs along the coast. It’s bumpier than I thought it would be and on average I needed to climb around 1200 meters on a 100km ride. Mentally, there have also been a few ups and downs already. There are those hours where I just ask myself, why am I doing this?

There are thousands of kilometres left to go, and the heat just keeps grilling me every single day. Just to make things clear: I am NOT thinking about quitting, not at all! It’s more like damn, there lie so many more tough days in the saddle ahead of me. However, these thoughts usually don’t last long. I just have to change the music, the podcast, or simply the direction of my thoughts. I am fortunate to do what I am doing, so why would I want it to change? (maybe sometimes a motorcycle would be nice). If you ask yourself what kind of music, podcast, audiobook I listen to right now, here is a list:

Music: Nick, a friend of mine gave me all his DJ tunes, mostly house and hip-hop. What I also really enjoy is the Spotify playlist “songs to sing in the shower”. People sometimes look at me while I am singing on the bike, but who cares?!

-“unsportlich“, this is a podcast a friend of mine produces weekly about sports news all around the world. It keeps me up to date and it’s good to hear some nice Zurich dialect every once in a while

-The Economist & McKinsey to listen to some business and economic stuff

– the 12 Rules for Life, which is a pretty exhausting book to listen to, that’s why I mostly avoid it.

-Extreme Ownership: good book to learn more about yourself and your mental/physical abilities

-Towers of earth, Ken Follet: really interesting book to listen to, it is like a movie playing in my head

Until now, almost everything with the bike went well. No flat tires yet, no crashes, no broken spokes whatsoever. The bike is just too heavy for the bike stand. The screws broke, so I had to get new ones from a local shop. I just got around 10 extra, because it’s probably going to happen again. Unfortunately, when the bike stand collapsed, it snapped the cable of my odometer in half. I was surprised by my craftsman skills but with some duct tape and a knife I managed to connect them again. The cable is a fair bit shorter now, but works again, wuhu! 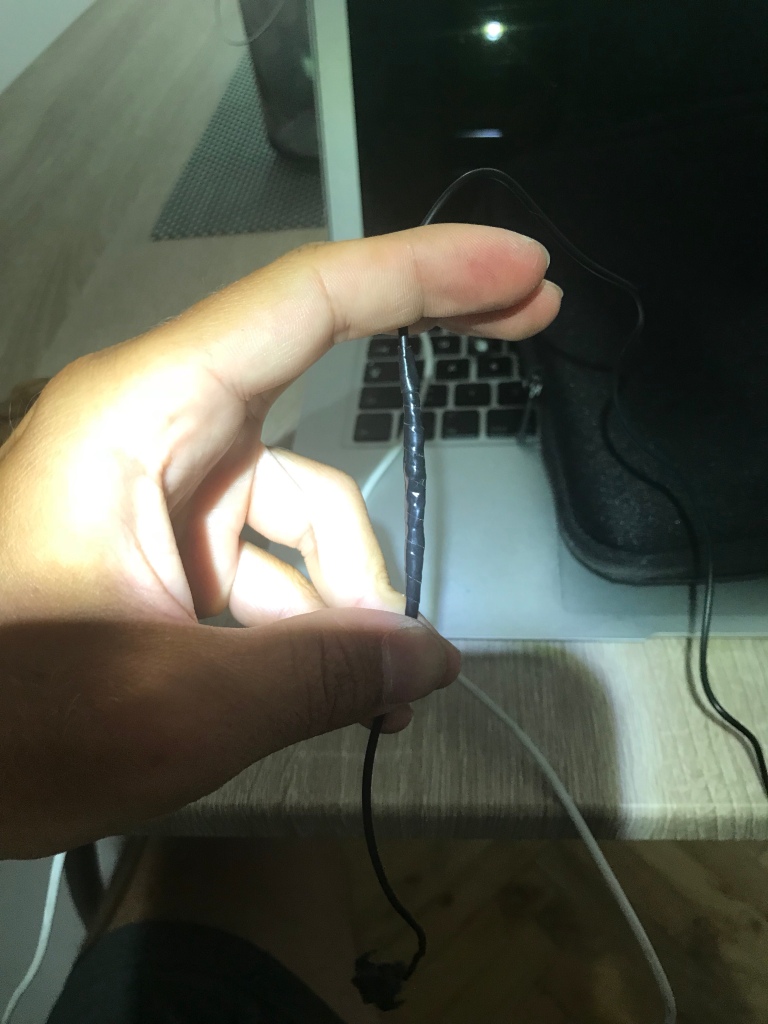 Material wise the only part of my equipment I sent home so far were my travel boots. I don’t regret it, just unnecessary weight and I already have too much of that. I will check everything again once I am in Athens. I might send home additional stuff I didn’t use.

Before I took off, many people asked me why I do it alone. I usually replied that I will never be alone. So yesterday while I was enjoying a break along the road in Montenegro, Markus showed up. He is a German teacher who cycles from Hannover to Athens in around a month. His average stage is about 150 km per day which is way more than mine. Since I have time, I don’t need to hurry that much. I enjoyed very much having a cycling partner for the day, he really pushed me. Another story happened right after that. I went to the campground and a random guy named Oliver walked right up to me asking if I was Swiss. The guard at the entrance had told him that a second Swiss guy on a bike had arrived earlier that day. Oliver is travelling through eastern Europe with his Nissan Micra, doing skydives and paragliding wherever he can. You can follow him here. By the way, he is a close friend of a good military buddy of mine. See, you meet so many interesting people along the road and the world is actually a lot smaller than we think it is.

Physically I am doing good, my knee pain has gone. I just feel the knee for roughly one day after a break if I push it a bit too hard. However, I do have some issues with my butt now. I think some hair grew backwards and it makes it uncomfortable for me to sit on it for 7 to 8 hours per day. l am looking forward to getting some scarf-skin on my butt.

Regarding weather, I only had sunny days until now. Sometimes it rained during the night, but other than that the sun just keeps roasting me like a chicken every day. Still, I can’t complain since it will only become hotter and hotter the further south I go.

I have now booked my flight from Athens to Cairo. It will be on the second of August. I can’t wait for the Africa adventure to start. Europe is nice and easy to travel but too organized for my taste. It could be a bit more challenging sometimes but I think I will have enough of that once I arrive on Africa soil.